Try to create space by dropping even further back from the vehicle in front of you.

This will allow you more time and space to react should the need arise.

Your vehicle should be in the safest position on the road having regard to all the hazards that you can see, to those you can’t see and those that may reasonably be expected to be there.

If possible you should dominate your correct position on the road so that an overtaker has to make a conscious effort to overtake you.

Then, if appropriate and when a suitable safe opportunity arises, allow the vehicle to pass you.

By keeping control of the space around you and using good judgment you could avoid an accident and save lives.

Use the two second rule to avoid being a tailgater yourself.

The standard of driving in Cyprus is generally poor.

Some people may use stronger adjectives and sometimes not without cause.

Traffic lights are operated on a timer, not by traffic monitoring equipment, so the wait can appear lengthy. This causes frustration to drivers who may well jump the lights.

Failing to comply with the red light is a common occurrence.
Do not assume that if your light is green it is safe to go. Always treat traffic light controlled junctions with extreme caution.

An inability of drivers to accurately judge speed of approaching vehicles and poor judgment, often manifests itself by vehicles pulling out in front of you from side roads and parking areas at inappropriate times.

Actions that cause you to slow down, swerve or stop are considered normal by many local drivers.  Particularly when trying to get out of a junction or when crossing your path.

When exiting from a side road, ensure you can see, and that other drivers can see you. If you can’t, move out slowly to get your view. Vehicles often travel at excessive speeds on narrow roads.

Stop signs are used at many junctions and crossroads in preference to Giveway signs which would be in most cases be more appropriate.  Often the sign and the stop line are positioned well before the actual junction affording no view of traffic on the main road.  To comply strictly with the law is difficult.  Use caution.

Are often disregarded, and to escape detection, offenders will travel through at high speed.

You will often find that when drivers negotiate a right hand bend they will cut in to the opposing side of the road on the apex of the bend. We have found it quite difficult to explain that in doing this the driver is making the bend more sever than it need be. In consequence you, as the driver traveling in the opposite direction, are forced to move over to the left.

Cars will often park on the zig zag area and on the crossing itself, even though it is a offence and highly dangerous. It is particularly hazardous for children as often the approaching drivers view is obstructed.

As with red traffic lights, stop signs and solid center white lines are widely disregarded. Ensure that you can change course, slow or stop if necessary. It should be noted that a single solid center line is often used and should not be crossed.

The inability to judge speed and the lack of knowledge on the handling and acceleration characteristics of their own vehicle, often lead to inappropriate or dangerous overtaking. If you see someone traveling behind you who you think will overtake, the chances are they will. Use caution.
Overtaking may be preceded by a period of tailgating.

Unfortunately roundabouts are often not used correctly by drivers and the signage on the approach, put up by the Public Works Department, are in many cases incorrect and do not comply with the Cyprus Highway Code. Be very careful!

YOU SHOULD NOT TAKE ANYTHING FOR GRANTED. DO NOT ASSUME THAT ANY SIGN IN YOUR FAVOUR WILL BE COMPLIED WITH.

Most hire companies will hire cars to drivers between the ages of 25 to 70 years without any problem.

If you are younger than 25 you have to have held a full licence for 3 years.

Most require you to declare this and may charge more for insurance.
If you are over 70 there is not usualy a problem  but some companies may not agree to hire you a car until they have met you personally in order to assess any possible incapability.

Some hire companies on the South of the Island will not allow you to take the vehicle over into the Northern (TRNC – Turkish) side. If you wish to cross the border make sure that the company specifically allows this.
Most companies exclude off road use.

Hire cars display a red registration plate.
Be aware that the drivers of these vehicles will often not be conversant with local conditions.

Vehicles must by law

carry a reflective warning triangle at all times. Larger vehicles should carry two.

Currently items such as First Aid Kit, Fire Extinguisher, Fluorescent Jacket, although advisable are not compulsory.

Many insurance companies in Cyprus include a full rescue, breakdown and recovery service as part of the insurance package.

One of the biggest and used by several companies is RescueLine (00357 22 44 66 00) and includes a recovery service for motorcycles.

If this cover is not offered to you by your insurance company you can subscribe directly with them or there are other options, for example,

Breakdown Cover only applies to the Republic of Cyprus. 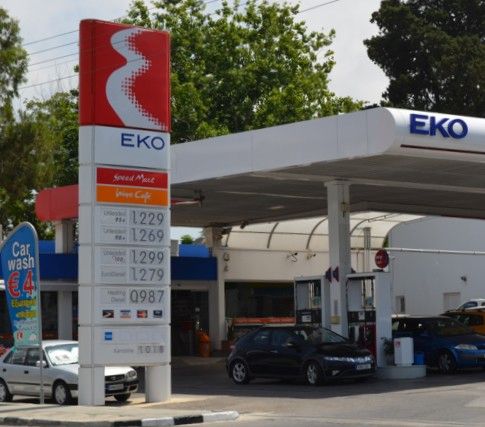 are modern and common in the towns. Most have attendants to fill your tank for you, although you will find a few that are self service.

Many major stations also have shops where you can buy auto accessories, food and drink.

Mountain driving uses more fuel than you might think.

So if you are planning such a trip, be sure you have enough fuel to get you there and back. If you make a wrong turn, although the distance may not look far on the map, it can take you some time to find your way back to civilization.

Most petrol stations are closed for attendant service at night and on Tuesday and Sunday.

This is not usually a problem though as there are machines that accept bank notes, major credit and debit cards and therefore operate 24 hours. The cash/card machines have instructions in Greek and English.

During the day when there is not a full  attendent service there is often an employee on site to help with the operation of the machine and pumps.

Often operate the system of handing the vehicle over to you with an empty fuel tank, so you return it empty. This can lead to problems at the end of your rental if you are not careful. This practice is slowly changing to the system of receiving and returning the vehicle with a full tank.

95 and 98 octane fuel is available. So check what octane your vehicle requires. There are other more expensive fuels, but you are unlikely to need them.

Fuel sold for motor vehicles is the cleaner Euro Diesel.

The Highway is a dual carriageway road similar to Motorway standard and is toll free. It links all of the main towns of the island Paphos, Limassol, Nicosia, Larnaca and beyond.

The full extent of the highway is often not shown on many of the older maps. I would advise you to obtain a free up to date map from the local CTO office.

The main roads of Cyprus are usually of a good standard and many have been recently resurfaced. Most of the work is now complete. There are plans to continue the upgrading of the road system over the next few years.

It is not unusual for a made up road to come to a sudden end and for it to continue as a dirt track. It may sometimes appear that you are in someone’s garden or yard. While of course you might be, don’t be too alarmed. If you have made a mistake and gone off the road into someone’s property, they will very rarely take offence. It is more likely that the road will return to being a “proper” road after a while.

The signing can be haphazard and can direct you into danger. The workmen themselves sometimes lack road sense and put themselves in danger.

In most countries in the EU the signing and operation of road works are governed by strict rules. Failure to comply with, for example, the correct number and positioning of cones, advanced warning signs etc. by the site operator can lead to closing the site down and to fines.

Cyprus does not yet generally employ European standards at roadwork’s although it is improving.

The workers on site have only recently started to wear reflective jackets and it is still not universal.

Slow down or stop if necessary until you are sure that your planed route through the road works is safe. Do not just follow other drivers through until you are entirely happy.

These photos show roadworks in Paphos.

KEEP SAFE ON THE ROADS OF CYPRUS,

Visitors from EU / EEA member states may use the Parking Card in Cyprus.

Do not park on roads where parking is prohibited.
Do not drive or park in pedestrian zones unless there is a sign showing that vehicles displaying the Parking Card are exempt.

The Permit allows a disabled driver:

Some visitors from outside the EU and EEA may use the Parking Card in Cyprus.

Each Country has different regulations.
Information regarding the use of Blue Badge Permits in the Countries where it is applicable and where the permit allows you to park can be downloaded  here.

There are several things you should know about speed limits in Cyprus.

The sign indicating you are entering a limit will normally only be displayed on your side of the road.

Having entered a posted limit, you will very rarely find the small repeater signs that you see in the UK. The next sign you will see may be a change in speed limit or when you pass over a municipal boundary.

It is often not clear when a speed limit ceases to apply. You will rarely see a de-restriction sign. There are long stretches of road which could be de-restricted, because of the layout and lack of hazards, but the last limit still appears to apply.

Speed limits posted at hazards, such as bends, are usually advisory in the UK. In Cyprus they are technically mandatory and must be obeyed. They are often placed with little thought as to their purpose or the affect they will have on traffic. You will not find many of the locals adhering to them.

Be careful of your speed.

The maximum speed limit allowed is lower than in the UK and can lead to impatience and an itchy right foot.

Drivers can drive with a current valid: