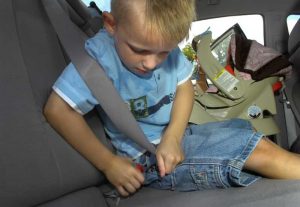 Police on Thursday reiterated calls to parents over child safety in cars following a Limassol accident that led to the hospitalisation of a 7-year-old child who was reportedly not wearing a seatbelt.

Meanwhile, the boy’s parents have claimed their son was buckled up in the front passenger seat.

The accident occurred around 3.40pm on Wednesday, when a car driving on Vasileos Pavlou Street entered Omonia Avenue and under conditions that are being investigated, crashed into another car which then hit the wall of a nearby store.

The second car was driven by the grandmother of the boy who was seated in the front. They were both taken via ambulance to the hospital as a precaution. The boy, who suffered bruises on his chest and head, was then taken to the Makarios children’s hospital in Nicosia for precautionary reasons where he continues to be treated.

The accident caused an uproar on social media as it was initially reported the child was not wearing a seatbelt, citing information from traffic police.

A netizen posted an article of the accident on social media explaining the importance of the use of car seats for young children. “For those of you who say ‘hush, but why do you still have the 8-year-old in a child car seat? What’s the point of keeping him in a seat until he’s 12? We didn’t have [child] seats and we grew up just fine.’ That’s the reason”.

The parents of the child rushed to defend themselves, saying that police have yet to take a statement from them.

“I have as a witness the person who pulled the child out of the car. They told me that to rescue him, they took off the seatbelt he was wearing,” the father of the child told AlphaNews on Thursday.

In the same article however, the online media cited sources from the Limassol traffic police who suggested the child was ejected from his seat and hit the windshield.

Meanwhile, road safety officer Giorgos Milis confirmed to the Cyprus Mail that examinations have not been concluded, so police have yet to determine whether the child was buckled up.

According to the relevant legislation, children up to 135cm height have to be on a child car seat, while those over 135cm to 150cm should be using a booster seat.

“The seatbelt should always be across the shoulder and chest as it is in adults, if it’s in the right position in the middle of the upper body then the child is safe,” the officer said.

Although police advise that children under the age of 16 are seated in the back seat, the law allows for minors to be in the front seat, since there are vehicles without back seats.

But Millis stressed that when younger children are seated in the front, the airbag should be electronically deactivated since it could cause injuries.

“We have had such cases in the past. Airbags can injure a child or break a child’s teeth,” the road safety officer said.