The Cyprus Police have been driving with their blue lights illuminated while on normal patrol. The policy has now changed because of the road safety implications. However there may be those who continue to use them in error.

SBA Police operate similar patrols within their jurisdiction, which is on the British Bases and surrounding areas.

Both forces are especially vigilant regarding excess speed on the Highway.

The Department have a number of employees who are appointed as Police Special Constables. They wear Police uniform with insignia denoting they are from the department. They carry out road checks in their own right, mainly for document and construction and use offences.

Most Municipalities employ their own uniformed police to enforce local bye-laws, traffic offences and parking.

Police have a policy of targeting a different offence each month.

The limit is lower than the UK.
The limit in Cyprus is 22 micrograms of alcohol per 100 milliliters of breath.
There are several mobile substantive breath test devices in Cyprus. These give the readout that is used in court. 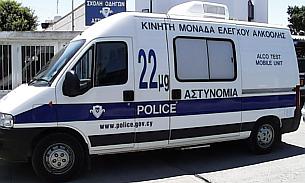 If you have a reading between 25 and 39 you will be detained until a responsible person is able to drive you and your vehicle away from the scene or Police Station. You will then be fined or taken to court. Offences, Fines and Points.

The speed and traffic camera system was deactivated on 21st September 2007. It would appear that several problems have been encountered in replacing them. It is not anticipated that the will be a speed camera system on the roads of Cyprus for the foreseeable future.

Many offences are dealt with by way of fixed penalty ticket with a fine. They have introduced a hand held, centrally controlled, computer system for issuing the tickets. Those who refuse a ticket will be reported and a summons to court will follow. Fines are not collected by the officer at the roadside. See – Offences, Fines and Points.

If you are a visitor, the points don’t effect you at present, but you should be aware that the EU, is currently trying to introduce an EU driving licence and make certain of the more serious traffic offences prosecutable across its borders. It may take some time to get agreement.

Traffic fines are not paid to the officer at the roadside.
More information on payment of fines….

For some offences your licence can be endorsed with penalty points leading to a driving ban and revocation of your licence. Where penalty points apply the Police Officer is obliged to impose the minimum penalty in each case. For serious offences the driver will be reported and a summons to court will follow.

In the main the offences in Cyprus are similar to those in the UK and Europe. See – Offences, Fines and Points.

The courts have the power to disqualify drivers for certain offences and those who have accrued 12 points. Points remain on a licence for 3 years. A court can impose a fine or imprisonment on foreign licence holders.